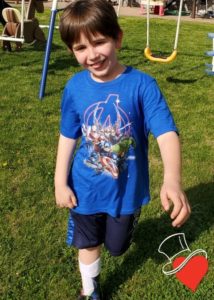 Zac loves to play sports. I mean any sport, baseball, kickball, football, basketball, and riding a bike. He also loves animals and video games. His dream is to be a professional baseball player that works at the zoo in his off time. He is such a sweet, loving boy that wants to help people and has a passion for learning as well.

In May of 2017, Zac had something called a hemorrhagic stroke. This left him with right side hemiparesis, as well as cognitive speech, and sensory problems. Hemiparesis is when one side of your body doesn’t work as well. Zac can use his right arm, but not really his hand. He can use his right leg, but not his foot. His right side also isn’t growing at the same rate as his left. Before his stroke, he was right handed. He has had to learn to do everything again. He also can’t walk long distances since it gets too tiring and can start hurting, or ride a bike like others since he doesn’t have full use of his right side.

Variety has been amazing. They have made playgrounds that he can enjoy a zipline or a swing, they have built baseball fields for Miracle League (which is a major love of ours), and they have given him an adaptive bike as well as an adaptive controller for his Xbox. Now, at 8 years old, he can ride bikes with his sister and play video games. Seeing him get to do things that make him feel a little more like his old self, are amazing. The smiles he has and imagination he uses are nothing short of a miracle. It is so nice to be able to let him enjoy a nice day with a bike ride, or a rainy day with a video game. Just doing things we never thought he would be ableable to do again.