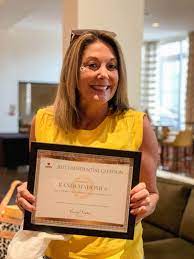 Years ago, I saw Patrick Mahomes at an event and he was talking with a young child with special needs. He knelt down to the child’s level and was engaging with respect, kindness, and interest – he treated Variety Kids like any other. It was a glimpse of his character off the field, and it was equally as impressive as his on field feats. That type of empathy is a learned trait and it told me everything I needed to know about his mother, Randi.

As a mom myself, I know how proud I am when someone comments on my son or daughter’s character – so I reached out to Randi Mahomes and thanked her for raising a son who could see beyond differences. A man who saw beyond the walker and saw only the child.  Then, on Friday night as I was sitting at home – I received a “Thank you” message back from Randi. A few months later a Facebook post appeared:  Randi Mahomes was holding a birthday fundraiser for Variety KC Kids!  What? There are  times in work life that I get caught off guard by unexpected and overwhelming kindness. This was one of those times. It turns out that Randi had been following Variety KC’s work to include a population of children with special needs. A population that is often invisible and uninvited. Randi saw them (no wonder her son demonstrated the same ability.)  That year, Randi raised enough for a custom sports wheelchair for Variety KC Kid, Jesus. He wanted to be a wheelchair basketball star but didn’t have the equipment. She presented it in person and Jesus just couldn’t believe what was happening.

Next birthday, Randi stepped in again and used her resources to promote her birthday fundraiser, bringing incredible awareness to the Variety KC mission. That year she supported inclusive playground equipment and important communication boards to help all kids to engage in play. In dedicating the gifts, Randi took time to meet with Variety KC Kids and families – she will never know the importance of her time and efforts. For a population used to being overlooked, her presence validated their worth. It is part of an important cultural shift of removing barriers and including all kids in the community. By lending her voice and being the mother she is – she naturally champions for Variety KC Kids with special needs.

It’s hard to imagine the constant spotlight and microscope that her entire family deals with daily. Grounded by faith and lessons of humility, gratitude, and kindness – Randi and her family display grace under pressure. She uses her natural gifts as a mother and combines it with an unnatural public spotlight to bring awareness to what’s important to her:  Faith, children and an opportunity for all kids to participate!  Her efforts toward inclusion were recognized with the Presidential Citation from International Variety last year – a rare and much deserved honor.

Fast-forward to last evening. I was once again sitting on my couch when a message popped up – Randi announced her birthday fundraising campaign for Variety KC again!  And, demonstrating the competitive spirit so obviously passed on to her own kids – Randi announced her intent to raise more than ever before.

Let’s make that happen!  Let’s make this her MVP year (Most Valuable Party!)  If you want to share in Randi’s legacy – donate whatever you can to her fundraiser. Let’s celebrate her sweetness, her fierce determination to support all kids, and the generosity of spirit that continually drives her to hold her fundraiser (now as a new grandmother too!) during the busiest part of the year for the Mahomes’ family.

www.varietykc.org/donate  (Be sure to check the dedication box and write in Randi Mahomes)